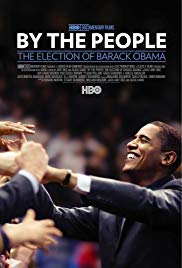 On November 4, 2008, Senator Barack Obama became the 44th U.S. president and the first African American elected to the White House.

"Obama, who was born in 1961 in Hawaii to a white woman from Kansas and a black man from Kenya, graduated from Harvard Law School and was a law professor at the University of Chicago before launching his political career in 1996, when he was elected to the Illinois State Senate. He was re-elected to that post in 1998 and 2000. In March 2004, he shot to national prominence by winning the U.S. Senate Democratic primary in Illinois, and that July he gained further exposure when he delivered the keynote address at the Democratic National Convention in Boston, which included his eloquent call for unity among “red” (Republican) and “blue” (Democratic) states. That November, Obama was elected to the U.S. Senate in a landslide.

On February 10, 2007, in Springfield, Illinois, Obama officially announced his candidacy for president. A victory in the Iowa caucuses in January 2008 made him a viable challenger to the early frontrunner, Senator Hillary Clinton of New York, whom he outlasted in a grueling primary campaign to claim the Democratic nomination in early June 2008.

During the general-election campaign, as in the primaries, Obama’s team worked to build a following at the grassroots level and used what his supporters viewed as the candidate’s natural charisma, unique life story and inspiring message of hope and change to draw large crowds to his public appearances, both in the United States and on a campaign trip abroad. His team also worked to bring new voters–many of them young or black, both demographics they believed favored Obama–to become involved in the election. Additionally, the campaign was notable for its unprecedented use of the Internet for organizing constituents and fundraising. According to The Washington Post: “3 million donors made a total of 6.5 million donations online adding up to more than $500 million. Of those 6.5 million donations, 6 million were in increments of $100 or less.”

In terms of campaign issues, Obama pledged to get the United States out of the war in Iraq and expand health care, among other promises. A crushing national financial crisis in the months leading up to the election shifted the country’s focus to the economy, and Obama and McCain each attempted to show he had the best plan for economic improvement.

On November 4, more than 69.4 million Americans cast their vote for Obama, while some 59.9 million voters chose McCain. (Obama was the first sitting U.S. senator to win the White House since John Kennedy in 1960.) Obama captured some traditional Republican strongholds (Virginia, Indiana) and key battleground states (Florida, Ohio) that had been won by Republicans in recent elections. Late that night, the president-elect appeared before a huge crowd of supporters in Chicago’s Grant Park and delivered a speech in he which acknowledged the historic nature of his victory (which came 143 years after the end of the American Civil War and the abolition of slavery): “If there is anyone out there who still doubts that America is a place where all things are possible, who still wonders if the dream of our founders is alive in our time, who still questions the power of our democracy, tonight is your answer… It’s been a long time coming, but tonight, because of what we did on this date in this election at this defining moment, change has come to America.”

The Library selected By the People for inclusion in The Whole Staircase Film Series. The November 4th screening was selected to coincide with the anniversary of Barack Obama's historic election in 2008.

Film Information: By The People: The Election of Barack Obama

"Nearly a year before Barack Obama announced his candidacy for the presidency, two filmmakers began to roll cameras on the young senator. Over the next 19 months, across the USA, the daily events of the presidential campaign are chronicled." - distributor's synopsis

This documentary film is not rated. Common Sense Media recommends it for ages 13 and older.

Resources for Further Exploration - By The People: The Election of Barack Obama